The elemental message communicated by Julie Borlaug during the 2020 D.W. Brooks Lecture on Nov. 10 was that no child should be born into a world with hunger and famine.

Borlaug is vice president of external relations for Inari Agriculture, a seed company using data and biological science to transform plant breeding, and granddaughter of renowned American agronomist Norman Borlaug, who led global initiatives that contributed to the extensive increases in agricultural production referred to as the Green Revolution.

Borlaug was the keynote speaker at the University of Georgia College of Agricultural and Environmental Sciences’ virtual D.W. Brooks Lecture and Awards celebration. Five of the college’s most innovative and dedicated faculty members were recognized with the D.W. Brooks Faculty Awards for Excellence, the college's highest honor.

Gregory Colson, an associate professor in the Department of Agricultural and Applied Economics, received the D.W. Brooks Faculty Award for Excellence in Teaching. He has developed hands-on experiments and games for his classes to reinforce the material and give students a tangible experience to complement his teachings on economic theory.

Esther van der Knaap, a professor in the Department of Horticulture and Institute of Plant Breeding, Genetics and Genomics, received the D.W. Brooks Faculty Award for Excellence in Research. She has spent much of her career working to understand the genetic shifts that have occurred between ancestral, wild tomato varieties and modern, cultivated tomatoes.

Phillip Edwards, a UGA Cooperative Extension county coordinator and Agriculture and Natural Resources agent in Irwin County, received the D.W. Brooks Faculty Award for Excellence in Public Service Extension. Edwards has conducted 139 applied research trials resulting in more than 50 state or national presentations and posters. He earned his bachelor's degree in agricultural economics from UGA in 1984.

Bob Kemerait, a professor in the Department of Plant Pathology, received the D.W. Brooks Faculty Award for Excellence in Global Programs. He has been a leader in U.S. Agency for International Development-funded projects to improve peanut production among small-scale farmers in Guyana, Haiti and the Philippines and recently received a Fulbright award to work with faculty and farmers in the northern Philippines.

“We are delighted to honor these exceptional faculty members,” said Joe West, interim dean and director of CAES. “Each of them brings unique skills that strengthen our discoveries and dissemination of scholarly work through education and outreach programs. They exemplify the quality we strive for as a land-grant college.”

Communication is the key to innovation

During the lecture, Borlaug said that, to change the discussion in agriculture, it is important to foster acceptance of all of the innovation available, both in developing countries and developed nations.

“My grandfather was part of the team that started the Green Revolution. I am asking for a different revolution — a change in the way agriculture is understood and accepted,” said Borlaug, who has developed agricultural partnerships between public, private and philanthropic groups to expand the mission her grandfather embraced. “My grandfather was a warrior against hunger, a mentor, a farmer, but first and foremost, a scientist. He believed that fear of  change was the greatest barrier to progress, and his view of science is that it had to be used in battle against hunger.”

Borlaug said it is crucial for technology and innovation in agriculture to be accepted and embraced, from the simplest innovations to the most complex.

Borlaug said that communication is key to the acceptance of innovation.

“We have had huge changes in agriculture that have not been accepted because we haven’t communicated in a way the general public can understand. Why should the consumer care?” she said.

Much of the negative public opinion regarding agriculture has been driven by misconceptions and mistakes that have been made along the way, both things that need to be addressed if the industry is to move forward in a meaningful, effective way.

“If you look at my grandfather’s success in the Green Revolution and the agriculture industry, they have made huge strides in the fight against hunger and malnutrition. They also used a lot of fertilizer, but they did it to avert famine. … One thing the industry did in that case, is they self-corrected. Yes, there might have been consequences that weren’t intended, but we always self-correct and we want to do better,” Borlaug said.

Part of that strategy to do better is to stop doing “business as usual” in agriculture, she added.

From advanced weather information systems to drones and smartphones, technology has already begun to revolutionize agriculture.

“Farmers in the field can take a picture of wheat rust and upload it, then it goes to CIMMYT (International Maize and Wheat Improvement Center, known by its Spanish acronym), those scientists look at it online and decide if it is UG99. If it is, they can mark it and continue to have information about where it has spread and where it is going,” said Borlaug, referring to a type of wheat stem rust that is present in wheat fields in several countries in Africa and the Middle East. The disease is predicted to spread rapidly through these regions and possibly further afield, potentially causing a wheat production disaster that would affect food security worldwide.

In order to make technology work to end hunger and poverty, a new generation of leaders need to be welcomed into the industry.

For a video of Borlaug’s full address and for more information about the legacy of D.W. Brooks, visit dwbrooks.caes.uga.edu. 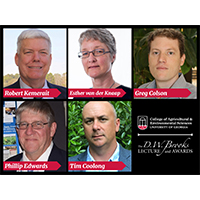 Georgia’s agriculture industry is weathering the storms — with the help of UGA support Posted on 03/02/21 by Paige Parvin
It’s been a rough three years for Georgia pecan farmers, whose cash crop has been battered by a hurricane, a fungal tree disease, and a global pandemic — all in relatively rapid succession.

UGA researchers investigate blue light to increase blueberry quality and fight disease Posted on 02/25/21 by Isabella Kerbers
The COVID-19 crisis has put supply chain issues at the forefront of food production and packaging concerns. Researchers at the University of Georgia investigated a potential solution for extending the shelf life of blueberries by exposing blueberries to blue light during storage.

New rapid test for watermelon disease Posted on 02/24/21 by Josh Paine
Fusarium wilt, caused by a soilborne fungus, is one of the most damaging diseases of watermelons worldwide. Since it was discovered in 1894, it’s been a battle for producers to manage through crop rotation and chemical fungicides.

Add color during dreary months by adding winter-blooming plants to the landscape Posted on 02/11/21 by Paul Pugliese
I find it ironic that Valentine’s Day occurs in February, a time of the year when we see very few plants blooming in the landscape. In addition to cards and candy, flowers are one of the most popular gifts during this annual celebration of love. In 2018, the Society of American Florists estimated that 250 million cut roses were produced for Valentine’s Day and an estimated 35% of Americans purchased flowers.
See More News Subscribe for Updates