By Julia Rodriguez for CAES News

Broadcast sprayers are commonly used to apply treatments to crops lower to the ground. The chemicals can reach the ground and kill any emerging weeds. Broadcast spraying doesn’t work for corn, which can grow as high as 12 or 14 feet and has leaves that block treatments from reaching the ground.

“When you’re treating corn later in the season, you’re treating a crop that you can’t go over with a typical boom sprayer because it’s too big. None of the herbicide gets on the ground where it needs to be,” said Eric Prostko, UGA Extension agronomist and weed specialist.

A tractor pulls the layby rig, and each boom nozzle applies the herbicide near the base of the cornstalk, which provides extra weed control throughout the season. The rig fits in between the rows of corn, and instead of a broadcast sprayer, a single nozzle boom or a hood sprayer with multiple nozzles is used to apply the herbicides.

Growers usually spray over the top of corn when it is a foot tall. These original herbicides often wear off by the time corn grows to about 2 feet or higher, and the height makes it difficult for applicators to spray again.

Weed management in corn is essential, especially during harvesttime. Broadleaf weeds, particularly annual morning glory plants, can wrap up in the combine and cause mechanical issues and harvest delays if they aren’t properly controlled.

A local farmer approached Jeffries about this weed management problem in 2015 after he was unable to harvest 46 percent of his 65-acre irrigated corn crop because of broadleaf weeds.

“It slows the harvesting process down or the farmers just don’t harvest at all because it’s impossible,” Jeffries said. “This is why the idea of layby equipment is so important. Farmers can apply treatments throughout the growing season, even when the corn gets tall.”

The same farmer changed his management strategy and began using a layby herbicide program in 2016. He harvested all of his acreage, and his profit increased by $24,538.

“I’m just glad I was able to provide a working solution to this problem,” Jeffries said.

Corn is a valuable crop in Georgia. In 2015, the UGA Center for Agribusiness and Economic Development reported corn’s farm gate value exceeded $252.9 million. 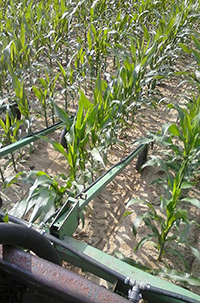 UGA Extension helps Georgia Grown connect to consumers Posted on 05/28/20 by Maria M. Lameiras
Like the moments before a race begins, dozens of staff with Georgia Grown and University of Georgia Cooperative Extension prepared to load thousands of pounds of fresh fruit and vegetables into hundreds of waiting cars and trucks stretched out in long lines at the Gwinnett Georgia Grown to Go event in Lawrenceville, Georgia, on May 27, even before the 3 p.m. start time.

UGA agriculture faculty produce COVID-19 video, materials for farm workers Posted on 05/22/20 by Maria M. Lameiras
As the spring harvest approached, members of the Georgia Fruit and Vegetable Growers Association knew they would need assistance to provide important information about COVID-19 safety measures and food handling protocols to workers who make up the majority of the seasonal agricultural workforce, many of whom are native Spanish speakers.

UGA Extension offers webinar on backyard fruit production Posted on 05/21/20 by Maria M. Lameiras
Home gardeners who want to expand their edible backyard bounty to include fruits are invited to participate in the University of Georgia Cooperative Extension Backyard Fruits webinar series that runs through June 5.
See More